A total of 250 RS3100 Capri's were built, 249 during November 1973 at Halewood the other car was built at South Ockendon before the others, this car could well be one of the 6 pre production cars built as it differs from the other 249 in that it has fixed rear quarter windows, flat 3 spoke steering wheel and black finished rocker covers it was also used for the studio shots which in turn were used on the Single Sheet Sales Brochure and the Supplementary Handbook the latter being supplied with all production cars. 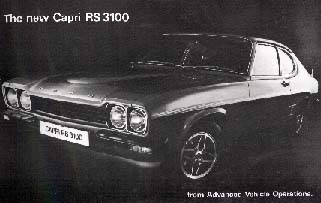 The RS3100 was based on a basic 3000GT there were no optional extras the only small differences between cars were that some had red needles on the dashboard others white (as on Mk2), some had imitation leather gear knobs others had plastic and some were fitted with inertia safety belts although most had static.

Mechanically the RS3100 sported a Essex 3000V6 bored out to 3090cc with inlet manifold and cylinder head ports hand polished everything else was as standard except the rocker covers (with the exception of the car mentioned earlier) these were always painted blue. 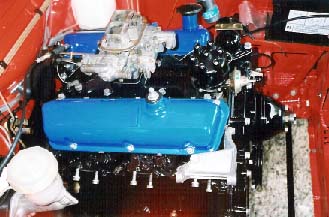 The suspension was as used on the RS2600 with Bilstein shock absorbers all round a unique hub and vented disc assembly along with Granada callipers up front, the front cross member was also redrilled to give negative camber, single leaf springs with lowering blocks at the rear the rear bump stop rubbers were also revised on the RS3100 as was the suspension (directors settings were used) as opposed to the RS2600.

RS3100's were available in 7 different colours Diamond White, Daytona Yellow, Sebring Red, Modena Green, Stardust Silver, Olympic Blue and Marine Blue all with gold decals around the power bulge, around the rear of the car and a triple line down the sides care of the RPO pack available at the time, externally the RS3100 also differed from the standard 3000GT with quarter bumpers up front (the N/S bumper iron incorporating a towing eye) along with a bib spoiler and a pair of spot lamp brackets which helped support the bumpers ( no spot lamps) single piece rear bumper finished in black ( the rear incorporating 2 number plate lamps) and a large Ducktail boot spoiler, all of these items were carried over from the RS2600 with exception of the Ducktail spoiler. 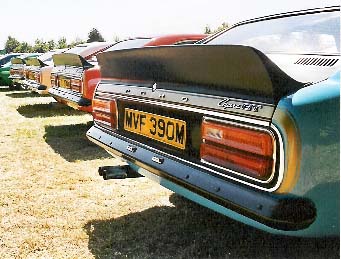 The RS3100 was also fitted with the same unique flared front wings as the RS2600 along with the equally unique RS 6x13 4 spoke alloy wheels. On the inside of the car all RS3100's had black headlining and black PVCseats fitted all other fitments were as the standard 3000GT Capri.

RS3100's were only sold through RS Dealerships, at the time a fuel crisis was on going and the Mk2 Capri was waiting in the wings which resulted in the RS Capri being somewhat of a nightmare to sell indeed Ford registered 23 of these cars for their Area Sales Managers to use in an attempt to push sales these particular cars were offered at discount prices with very few miles on them, and in June/July 1974 50 RS3100's were exported to Australia.

Finally apart from the items mentioned previously that make the RS3100 unique one important area to check is the O/S inner wing the black and silver manufacturers plate where the Chassis Number is stamped will always start with the letters BBECND followed by a 5 digit number, next to this plate is another plate painted body colour the same Chassis Number will appear on here as will the colour followed by the letter A i.e. "Sebring A" and at the bottom the words SPA SPECIAL, the Chassis Number is also stamped on the inner wing where the suspension re-inforcing plate is, reading anti clockwise from approx 6 o'clock position looking in the engine bay from the O/S wing area.